We hope to obtain discharges of federal student loans under new federal guidelines coming out on November 1, 2016 allowing students to raise a Borrower Defense to Repayment (“BDTR”). We are offering reasonable payment plans for our legal fees. It will likely take up to a year for the application to be processed and hopefully approved.

These for-profit schools had many of the warning signs of a poor-quality institution: aggressive recruiting tactics, high dropout rates, low loan repayment rates, grade inflation, and a large percentage of revenue derived from government subsidies. The type and meaning of the school’s accreditation was often falsely represented. Job placement rates and the cost of education were also misrepresented. Evidence of fraud is coming to light about these representations about job placement, the cost of education and accreditation that may be sufficient to be a state law violation.

So what is BDTR and how did it come about? It was originally promulgated in 1994 by the Department of Education. It provides that “[i]n any proceeding to collect on a Direct Loan” – including, without limitation, a tax refund offset proceeding, a wage garnishment proceeding, a salary offset proceeding or a consumer reporting agency reporting proceeding – “the borrower may assert as a defense against repayment, any act or omission of the school attended by the student that would give rise to a cause of action against the school under applicable State law.” The BDTR is found in the set of regulations that governs the William D. Ford Direct Loan Program. The Direct Loan Program is a 2010 federal loan program under which the government extends loans directly to students. In July 1995, the Department issued an interpretation of the regulation, indicating that the claim must “directly relate[] to the loan or to the school’s provision of educational services for which the loan was provided.”

But then for 20 years, BDTR was virtually dormant as there were only five reported cases filed under BDTR. So the DOE elected not to promulgate any forms, instructions or regulations regarding how to implement BDTR. Then came Corinthian Colleges, Inc.’s April 2015 closure and subsequent bankruptcy which was quickly followed by over 26,000 applications for closed school discharge and defense to repayment from students who attended Heald, Everest and WyoTech among others. In response, the DOE placed the BDTR claimants in a holding pattern while it proceeded to utilize a Special Master and a negotiated rules committee to develop a protocol including a universal application form to facilitate the application process for students who were not covered by specific ED findings. The regulations finished a comment period at the end of August and are expected to be released on November 1.

While these new regulations govern all federal loans, we are targeting our applications at certain for-profit schools such as Everest, Corinthian, ITT and IADT, among others. We have focused mostly on ITT initially as it has just shut down only a month before this new program is finalized. While at the time of its closure ITT was undergoing multiple investigations by the DOE, the SEC, the CFPB and 19 state attorney generals, there has been no official finding of fraud by the DOE, nor any court rulings to date. The actual cause of the shutdown was the DOE’s determination after consulting with ITT’s national accreditation agency, (ACICS) that it was too risky to continue federal funding of student loans at ITT and requested ITT increase its reserves for potential claims. ITT shut its doors for good a week later.

The application process requires specific and detailed information about the representations made by ITT’s staff as well as arguments as to how the student relied upon the representations in deciding to enroll in ITT. A BDTR claim must be based on a school’s act or omission that would give rise to a cause of action against the school under applicable state law.

The DOE has determined that it will allow FFEL and Perkins borrowers’ claims of BDTR to be evaluated under the same standards as those available to Direct Loan borrowers if those borrowers consolidate their FFEL and/or Perkins loans into Direct Consolidation Loans. Any refunds will be treated differently, but the discharge of remaining balances will be available through this route. Federal Parent Plus loans will also be eligible for relief.

In our efforts to seek solutions for unaffordable private and federal student loans, we are hopeful that BDTR will result in widespread discharges of federal student loans for students who attended for profit schools like ITT, provided we can allege sufficient acts or omissions that were deceptive and unfair trade practices under Florida’s Unfair and Deceptive Trade Practices Act (“FUDTPA”) or other state law violations. State usury laws may come into play for the temporary credits ITT used to fill the gaps in its tuition that exceeded available federal aid. While the Truth in Lending Act (“TILA”) is a federal law, Florida Statute §516.031 limits the interest rate and requires disclosure as required by TILA. While the present BDTR is silent on the timeframe in which a borrower can raise a BDTR defense, we are waiting for the final regulations to see if there is a statute of limitations. If so, we imagine it will likely be 3 years (the present time frame for the DOE to recover the amount of loss from a school) or 4 years (the SOL under FUDTPA or any state tort for misrepresentation or fraud) – but a usury violation would have no statute of limitations.

Additionally, for current students, area community colleges are accepting transfers of credits on a limited basis. There is the Closed School Discharge Program for students who attended ITT within 120 days of its closure and who cannot transfer their credits elsewhere. If students do transfer their credits elsewhere, that will limit their ability to apply for a closed school discharge for their federal loans. They will need to weigh the value and time commitment of the education received at ITT and whether they want to seek to continue their education and repay the federal loans, or discharge their federal loans and start anew. 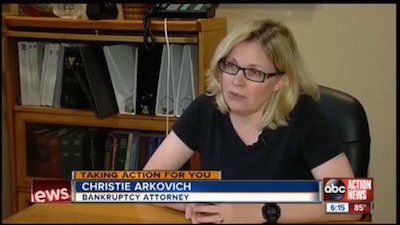 TAKING ACTION FOR YOU | Our reporter, Adam Z. Winer, shows us how some people made their student loan debt disappear.